The Secret History of the Mongol Queens: How the Daughters of Genghis Khan Rescued His Empire (Paperback) 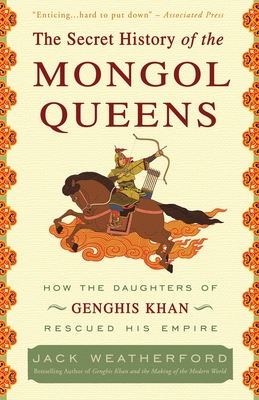 “Enticing . . . hard to put down.”—Associated Press • “A fascinating romp through the feminine side of the infamous Khan clan.”—Booklist

The Mongol queens of the thirteenth century ruled the largest empire the world has ever known. The daughters of the Silk Route turned their father’s conquests into the first truly international empire, fostering trade, education, and religion throughout their territories and creating an economic system that stretched from the Pacific to the Mediterranean.

Yet sometime near the end of the century, censors cut a section about the queens from the Secret History of the Mongols, and, with that one act, the dynasty of these royals had seemingly been extinguished forever, as even their names were erased from the historical record.

With The Secret History of the Mongol Queens, a groundbreaking and magnificently researched narrative, Jack Weatherford restores the queens’ missing chapter to the annals of history.

Jack Weatherford is the New York Times bestselling author of Genghis Khan and the Making of the Modern World; Indian Givers: How the Indians of the Americas Transformed the World; The Secret History of the Mongol Queens; and The History of Money, among other acclaimed books. A specialist in tribal peoples, he was for many years a professor of anthropology at Macalaster College in Minnesota and divides his time between the US and Mongolia.