Journey of the Pharaohs (The NUMA Files #17) (Hardcover) 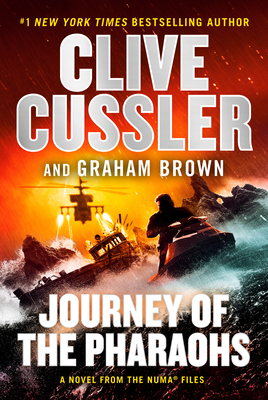 By Clive Cussler, Graham Brown
$29.00
Email or call for price.

This is book number 17 in the The NUMA Files series.

Kurt Austin and the NUMA crew risk everything to stop a cutthroat arms dealer from stealing a priceless ancient treasure in the thrilling new novel from the #1 New York Times-bestselling grand master of adventure.

In 1074 B.C., vast treasures disappear from the tombs of Egyptian Pharaohs. In 1927, a daredevil American aviator vanishes on an attempted transcontinental flight. And in the present day, a fishing trawler--along with its mysterious cargo--sinks off the coast of Scotland. How are these three mysterious events connected? And, more importantly, what do they mean for Kurt Austin and his NUMA team?

As they search for answers, the NUMA squad join the agents of the British MI5 to take on a wide-reaching international conspiracy. Their common enemy is the Bloodstone Group, a conglomerate of arms dealers and thieves attempting to steal ancient relics on both sides of the Atlantic. Kurt and his team soon find themselves wrapped up in a treacherous treasure hunt as they race to find the lost Egyptian riches. . . before they fall into the wrong hands.

Clive Cussler was the author of more than eighty books in five bestselling series, including Dirk Pitt®, NUMA® Files, Oregon® Files, Isaac Bell®, and Sam and Remi Fargo®. His life nearly paralleled that of his hero Dirk Pitt. Whether searching for lost aircraft or leading expeditions to find famous shipwrecks, he and his NUMA crew of volunteers discovered and surveyed more than seventy-five lost ships of historic significance, including the long-lost Confederate submarine Hunley, which was raised in 2000 with much publicity. Like Pitt, Cussler collected classic automobiles. His collection featured more than one hundred examples of custom coachwork. Cussler passed away in February 2020.

Graham Brown is the author of Black Rain and Black Sun, and the coauthor with Cussler of Devil's Gate, The Storm, Zero Hour, Ghost Ship, The Pharaoh's Secret, Nighthawk, The Rising Sea, and Sea of Greed. He is a pilot and an attorney.

"Lively. . . The twist ending fits neatly into the Cussler canon. Series fans will be pleased.”--Publishers Weekly