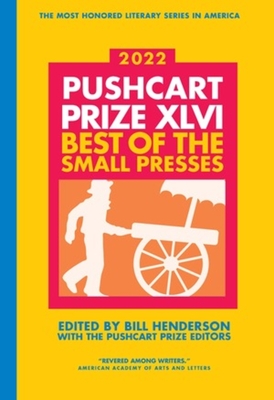 This is book number 46 in the The Pushcart Prize Anthologies series.

The 46th annual edition of the most celebrated literary series in America.

Over 60 brilliant stories, poems and essays from ?dozens of small presses, ?as selected from 900 presses worldwide by ?more than ?200 distinguished staff contributing editors.

Series Honors: The American Academy of Arts and Letters awarded Pushcart its 2020 recognition for “Distinguished Service to the Arts.”

In 2005 Poets &Writers / Barnes and Noble noted Pushcart for their Writers For Writers prize. And in 1978 Publishers Weekly’s Carey-Thomas Award went to the Pushcart Prize.

Booklist - “Resplendent…A perennial must have.”

Library Journal (starred) - "Fascinating ….A must have for all collections."

Bill Henderson is the founder and editor of the Pushcart Prize. He received the 2006 National Book Critic Circle’s Lifetime Achievement Award and the Poets & Writers / Barnes & Noble Writers for Writers Award. He is also the author of several memoirs, including All My Dogs: A Life. The founder of the Lead Pencil Club, Henderson lives on Long Island and In Maine where he runs the Pushcart bookstore – “the world’s smallest bookstore.”