The Winners: A Novel (CD-Audio) 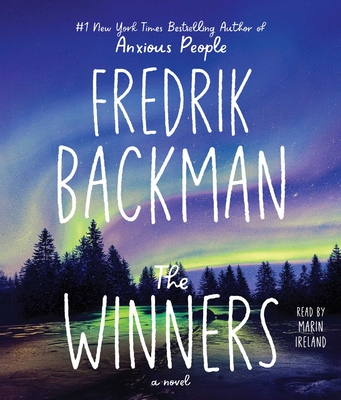 “I savored every page, every word of this well written story of a hockey community; love, death, marriage, human nature, and all for the love of Hockey. Fredrik Backman will take you out of the cold and into your heart.”
— Karen Piacentini, Fenton's Open Book, Fenton, MI

A breathtaking new novel from the #1 New York Times bestselling author of Anxious People and A Man Called Ove, The Winners returns to the close-knit, resilient community of Beartown for a story about first loves, second chances, and last goodbyes.

Over the course of two weeks, everything in Beartown will change.

Maya Andersson and Benji Ovich, two young people who left in search of a life far from the forest town, come home and joyfully reunite with their closest childhood friends. There is a new sense of optimism and purpose in the town, embodied in the impressive new ice rink that has been built down by the lake.

Two years have passed since the events that no one wants to think about. Everyone has tried to move on, but there’s something about this place that prevents it. The destruction caused by a ferocious late-summer storm reignites the old rivalry between Beartown and the neighboring town of Hed, a rivalry which has always been fought through their ice hockey teams.

Maya’s parents, Peter and Kira, are caught up in an investigation of the hockey club’s murky finances, and Amat—once the star of the Beartown team—has lost his way after an injury and a failed attempt to get drafted into the NHL. Simmering tensions between the two towns turn into acts of intimidation and then violence. All the while, a fourteen-year-old boy grows increasingly alienated from this hockey-obsessed community and is determined to take revenge on the people he holds responsible for his beloved sister’s death. He has a pistol and a plan that will leave Beartown with a loss that is almost more that it can stand.

Fredrik Backman is the #1 New York Times bestselling author of A Man Called Ove, My Grandmother Asked Me to Tell You She’s Sorry, Britt-Marie Was Here, Beartown, Us Against You, and Anxious People, as well as two novellas and one work of nonfiction. His books are published in more than forty countries. He lives in Stockholm, Sweden, with his wife and two children. Connect with him on Facebook and Twitter @BackmanLand and on Instagram @Backmansk.

"By now, the Beartown series without Marin Ireland’s confident narration would be unimaginable. She maintains her consistently high standard, often with moving and ultimately heartbreaking results. Backman’s latest installment finds the residents of the beleaguered hockey town grappling with a severe approaching storm, while a mounting series of backdoor deals threaten the town’s identity even more permanently. The wide cast of characters returns for this expansive installment, with choices and decisions from past installments popping up again. Ireland smoothly meets the task, providing exacting performances of diverse voices while capturing the knowing voice of the community as a whole. She carries listeners to the emotionally shattering conclusion."
— Winner of an AudioFile Earphones Award, AudioFile Magazine

"Backman writes with a signature rhythm: a little here, a bit more there, something of this person then that person, a tease about what will happen, warnings about what can’t. The result is a resonant symphony enhanced by the stupendous Ireland, who thankfully returns to Beartown as anointed cipher. The story here “shouldn't take long to tell,” Backman insists, “it starts right here and ends in less than two weeks, and how much can happen in two hockey towns during that time? Not much, obviously.” Oh, what understatement. Ireland embarks on an epic journey to conclude Backman's trilogy with satisfying sighs, plenty of tears, and maybe a wee bit of hope for humanity. The sudden death of local Bearskin bar owner Ramona brings home Maya and Benji, two lost souls who escaped after “the scandal” (when Kevin raped Maya and Beartown self-destructed). Ruth, whose truth was never believed, also returns—as virtually anonymous ashes—pushing her left-behind brother toward revenge against her local killers. Implosions prove inevitable. Ireland miraculously ensures that every voice is memorably heard; in addition to the beloved main cast, Ireland is equally magnificent with the smaller and no less important players including brilliant Zackell, mysterious Lars, prodigious Alicia, surprised Big City, and all the others. Backman admittedly meanders on occasion, but Ireland never misses a beat."
— Terry Hong